Are you Building Owner proposing to carry out construction works to your Property?

Are you an Adjoining Owner who has received a Party Wall Notice?

We can advise you and assist you through the process.

The Party Wall etc. Act 1996 is an act of parliament which legally requires anyone proposing to carry out certain types of work to their property to formally notify (by way of a notice) the owners of the neighbouring properties before commencement.

There are three types of work that are notifable under the Act.

Below are some typical examples of work that is likely to be covered by the Act:

Where work falls within the scope of the Act it is necessary for the Building Owner(s) or their authorised representives to serve the correct notice(s) and obtain written consent from Adjoining Owner’s effected by the proposed works, if that consent is not forthcoming for what ever reason then the parties are deemed to be ‘in dispute’ under the Act and at this point both the Building Owners and the Adjoining Owners have to appoint a Party Wall Surveyor to proceed with resolving the dispute.  This could be their own separate surveyors  or, by agreeing to a single surveyor, called the Agreed Surveyor. Once the Party Wall surveyor(s) are appointed the dispute can be resolved by way of a Party Wall Award or sometimes called a Party Wall Agreement this is the framework provided by the Party Wall etc. Act 1996 which enables a resolution so that the Building Owners can undertake the proposed works whilst providing protection to both parties.

Construction of a new wall either up to or astride (with consent) the boundary . 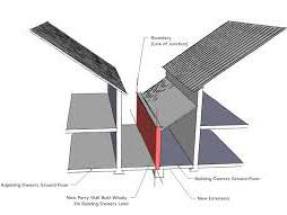 Inserting a beam, removal of a chimney breast, underpinning or raising a party wall. 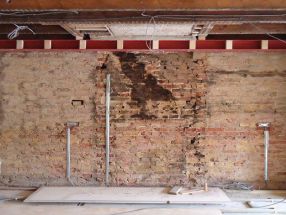 Excavation for new foundations within 3 meters. 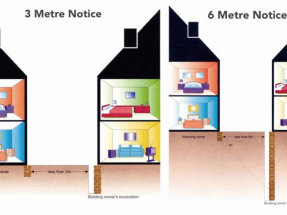